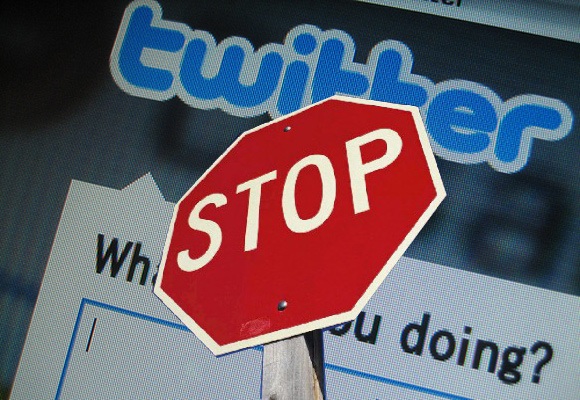 10 Things You Need to Stop Doing on Twitter. Right. Now.

Last week we talked about common Facebook offenses in our post “10 Things You Need To Stop Doing on Facebook”, so this week we’re talking about Twitter! And while we don’t want to point fingers… we’ve noticed people committing some pretty bad Twitter offenses lately. So let’s get straight to the point and get real about the 10 things YOU need to stop doing on Twitter…right now!

No profile photo? No bio? No thanks! If you haven’t uploaded a photo or completed your Twitter bio, you come off as a) untrustworthy b) a mystery c) a Twidiot, or d) all of the above? If you chose d) all of the above, you’re correct! There is simply no excuse for not completing your profile or failing to upload a photo. People are a lot less likely to care about what you have to say or follow you if you have an incomplete Twitter profile.
Need some tips to get you started? This is your Twitter account, so your photo should be of you– that’s it. Also, when filling out your biographical info, make sure to include keywords (i.e. “Shop Consultant” “health and fitness” or entrepreneur”). This makes it easier to find you in searches (a good thing if you’re using Twitter to network).
Posting links and nothing else Are you in the habit of only tweeting links to your portal? Then stop right now! When someone goes to view your profile to see if you’re worth following and all they see are a bunch of “sketchy looking” links, do you think they’re going to follow you – much less click on any of those links? No, they’re not. Instead, retweet people you follow, share your thoughts on the day’s events, and take part in the conversation that is going on all around you. Links are ok once in a while, like if someone tweets you asking about your favorite supplements or the lip gloss you wore to an event the weekend before. Other than that, focus on adding value to the discussion and interacting with others.
Not using hashtags If you’re not including hashtags in your tweets, you’re doing it wrong! Hashtags are important because they make it possible for people other than your followers to search for your tweets. For example: if you’re tweeting about a great networking event you just attended, use one or two appropriate hashtags in your tweet, like #Entrepreneur or #Networking.
Direct messaging new followers with a link to your portal If you want to send a personalized direct message to everyone who follows you, go ahead. But if you want to send a generic direct message with a link to your portal to your new followers, DON’T DO IT! This makes you look like a sleazy salesperson, and no one likes to be sold to on social media (unless they ask first).
Not retweeting anyone If you think that you’re “doing enough” by tweeting a few times a day and not interacting with others and retweeting them, you’re wrong! If you want people to follow you and care about what you have to say, you MUST retweet! A few tips: when you see a tweet that really stands out to you, retweet it and then follow it up with a direct reply to the user you retweeted. Try saying something like “couldn’t agree more!” or “thanks for sharing that article, it was really thought provoking!” This will show that you are not a Twitter robot and that you’re interested in themand what they have to say.
Tweeting the same thing…over…and over…and… If you tweet the same tweets over and over and over,  cut it out already! It doesn’t matter if you’re tweeting about what you ate for breakfast or links to your portal; you’re making a fool of yourself and look like a spammer. Not to mention that you’re making it really easy for the few people who do follow to unfollow you.
Posting your tweets directly to Facebook Have you set up your Twitter account to post all your Tweets to Facebook? Then please go disable that function. Here’s why you shouldn’t post your tweets to Facebook:  a) people who follow you on both social networks don’t want to see the same post twice b) hashtags, retweets, and mentions are totally useless symbols on Facebook and look more like gibberish than anything else, and c) it gives your friends the impression that you never log on to Facebook to check out what they are posting. You don’t want people to start defriending you because they think your Facebook friendship is one-sided, do you?
Not following back Even though it’s not necessary to follow everyone who follows you, it is important to follow back users you find interesting. If you don’t follow anyone back, you’re basically saying “my tweets are more interesting than yours, so you should want to follow me regardless of whether I follow you or not.”
Following everyone and their grandma Just because we said that not following anyone back makes you look bad, that doesn’t mean you should follow as many people as you can. Why? Because you will end up following a bunch of people who are not part of your target audience or industry. Do your best to follow people you have something in common with.
Protecting your tweets Unless you use Twitter solely to connect with close friends and family, there’s no point whatsoever in “protecting” your tweets. “But why wouldn’t I want my tweets to be protected? It sounds like a good thing.” By choosing to protect your tweets, the only people who can see them are you and your followers. Not to mention that people must submit a request to you to be one of your followers. If that doesn’t discourage people from following you, I don’t know what does!
These are our top 10 things you need to stop doing on Twitter, but we want to hear yours! Post your top Twitter offenses in the comment section below!
Share
Tweet
Pin
0 Shares